Many organizations make some early 5S improvements then slide back into their old ways while others maintain their 5S programs for years. What separates the two? An unsuccessful implementation of 5S is typically an incomplete 5S program. There are three keys to successfully sustaining 5S: commitment, top management support, and performance measurement.…

Should there be a 6th S or is it naturally part of 5s?

I meet many folks at Lean conferences that walk by our 5S Store booth and suggest we change our name to The 6S Store to include Safety as their company has done. My take has always been that a solid 5S program will naturally improve safety. I'm a traditionalist and prefer to keep the original 5S format. Moreover, I think Safety is so ultimately important that it should be on it's own. What are your thoughts?


See below a quick recap of the 5S's and the rationale behind the process:…

1. Designated 5S days: Select a day per month or per quarter to emphasize 5S throughout the plant.

2. Slogans: Select a 5S related slogan, post it in…

A quick tip to a successful 5S program

Without doubt the most effective method to sustaining a 5S program is to have the Sr Management including the President of the company do a quick 5 - 10 minute 5S walk every week, without fail and comment to the staff about the 5S program. Hands down, nothing will help change the culture more than this weekly focus.

Do you have a visually controled recycle system? If so, post it on the 5S Best Practices blog! Take a look at this great visual application. 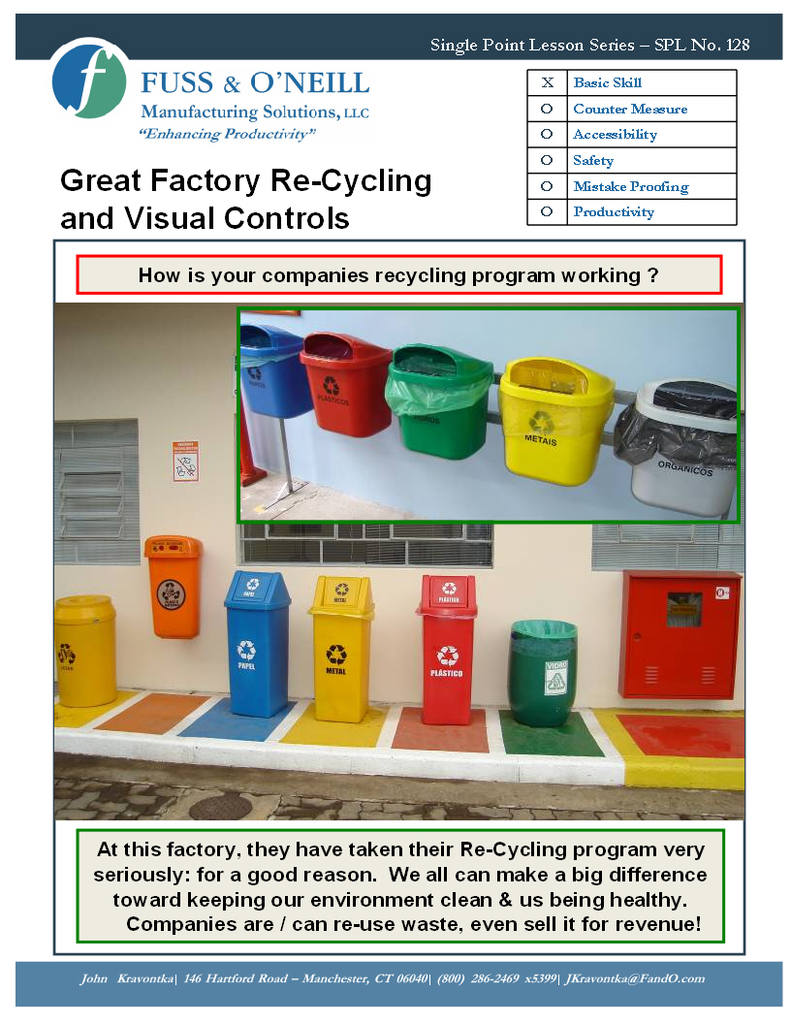 4 Tips for 5S in the Office

I just found this off of my Linked In Group. I hope you find it useful.

5S is the five step process of organizing a workplace. The five steps include:

Shortly after I began working at LeanCor in September, I learned that one of my duties would include conducting a…

Perils of Ignoring 5S in Offices

The Perils of Ignoring 5S in Offices

An often overlooked strategy to ensure sustainment of a 5S program is high performing supervisors. These folks are on the front lines and need to be prepared to hold their staff accountable when they don't follow the program. Find below some tips from Steve Lage at PDG.

We wrote the feature to help people understand how important supervisors are in achieving and sustaining improvement. This is something most organizations just don't get, and the impact is staggering.
High…
Continue

Here is a great article from Jim Womak of LEI fame.

My LEI colleague Dave LaHote is fond of saying that managers - and especially senior managers - overestimate their effectiveness, particularly as they seek to improve their organizations through formal initiatives. And they underestimate the impact (often negative) of their daily personal actions on employees. Recently I witnessed a striking example while visiting a metal casting…

Congratulations to Robert Leonardo for winning the 5S Best Practices Sweepstakes. Robert sent in numerous before and after pictures. Clearly his team is on the correct path. We look forward to seeing more of their improvements in the future.

Way to go Robert and Team!

It's a great program. Everyday Karl Wadensten interviews Lean practitioners. You can listen right from your desktop.

Has anyone come across a 5S clock? We're looking for a clock which would indicate which of the 5 S's the team in that area is working on. Thanks